On many occasions, you may have read tips that suggest using Witch Hazel instead of Rubbing Alcohol.

Or maybe some skincare pro in amongst your friends and family suggested you switch Toner with Witch Hazel. Is it really safe and worth it? Come, let’s put some light into it together.

What is Witch Hazel?

Witch Hazel is a plant with three species commonly found in North America. They are occasionally also known as Winter blooms. Two common Witch Hazel plant species are also found in China and Japan (one each).

Witch Hazel is basically a shrub that has been popular for its usage in a variety of skin ailments for centuries.

It has several uses and benefits, from fighting acne and pimples to treating burns, hemorrhoids, inflammation, insect bites, and bruises.

Due to its endless benefits, Witch Hazel commonly comes in handy as an active ingredient in toners and several other skincare products.

Is Witch Hazel and Rubbing Alcohol the same?

Today when you step out to your local drugstore, you can easily find Witch Hazel in its pure form. If you are a first-time buyer and not familiar with the difference, you may confuse Witch Hazel with Rubbing Alcohol.

It is because bottles and liquid of both the solvent appear out to be quite similar. However, in reality, Witch Hazel and Rubbing Alcohol aren’t the same liquid. 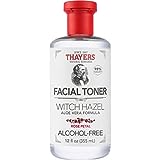 How does Witch Hazel differ from Rubbing Alcohol?

Witch Hazel is basically a plant extract, whereas Rubbing Alcohol comes from petroleum, natural gas, coal, and other fossil fuels.

While the former is mild and is safe for use in skincare, the latter is harsh and is known for its disinfecting and flammable properties.

For a lot of instances, both Witch Hazel and Rubbing Alcohol might substitute, but in reality, they are quite different in their origin and make.

Witch Hazel or Hamamelis virginiana is a suburb derived from the bark and leaves of a plant. From ancient times people used it in their traditional medicines, especially the one for treating irritation and inflammation.

In several countries, Witch Hazel commonly comes in handy for treating eczema. While its usage on the face is regarded as safe, individuals also use it in several other body parts, including private areas.

Rubbing Alcohol is a chemically alcoholic solvent also known as surgical spirit. It is colorless, odorless, and pure liquid.

It primarily comes in handy as an antiseptic and disinfectant though the liquid has endless other usages to it. Rubbing Alcohol is either Isopropyl based or Ethyl based.

With Alcohol in its name, individuals should not consume it. Individuals who accidentally or purposely drink Rubbing Alcohol can suffer from acute Alcohol poisoning. It is also highly flammable, and with a slight spark, it will lead to fire, flames, and even blast.

Can you use Rubbing Alcohol instead of Witch Hazel?

When you do not have a bottle of Witch Hazel at home, you can also use Rubbing Alcohol for several similar purposes.

As both the solvents come out for cleaning cuts and wounds, you can use any of them. Or, here is a list of Witch Hazel usage that Rubbing Alcohol too can make up for. Have a look: 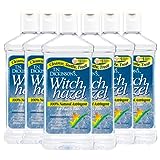 Can I use Witch Hazel as a facial toner?

Due to its antioxidant, astringent, and anti-inflammatory properties, Witch Hazel can serve several purposes. For days when you are out of facial toner, you can use Witch Hazel for the purpose.

Begin with washing and drying your face. Now using a cotton pad, apply Witch Hazel as a facial toner and top it with moisturizer and sunscreen.

However, if you have dry or extremely sensitive skin, avoid using Witch Hazel or consult a dermatologist before.

Can I Use Rubbing Alcohol as a facial toner?

No, never use Rubbing Alcohol as a facial toner or for any other purpose directly on your skin. Isopropyl is normally too harsh that, for one benefit, it can leave your skin with multiple other harms.

You may feel irritation, pain, and even get bumps after applying Alcohol to your face. Prolonged usage of Isopropyl on the skin can also lead to Alcohol poisoning.

Both Rubbing Alcohol and Witch Hazel serve their individual purposes, and thus, nothing is superior in reality.

Witch Hazel is a gentler astringent, whereas Rubbing Alcohol is a strong disinfectant.

On a different front, both the solvents may prove superior to one another. Though if you compare them together, they are both equally effective, handy, and beneficial home use solvents.

Witch Hazel is strongly antiseptic and astringent, but it isn’t antibacterial. Even as per doctors and other experts, there is no confirmatory evidence that proves the disinfectant properties of Witch Hazel.

Thus, individuals must not use it as a single germ-fighting ingredient in their DIY home cleaning. Instead, add a few caps full of Rubbing Alcohol or hydrogen peroxide for better results.

Difference Between Witch Hazel and Hydrogen Peroxide- Are They Similar?

Witch Hazel and Hydrogen Peroxide aren’t the same but two totally different solvents. The former is a medicinal plant, whereas the latter is a chemical compound.

Here is a list that speaks about the major difference between Witch Hazel and Hydrogen Peroxide:

Witch Hazel and Hydrogen Peroxide can come in use for several purposes, though use it quite thoughtfully.

Especially before using these solvents on the skin, near ignition points, etc., do your research.

Upon wrapping this up, we would suggest you ask your dermatologist before using Witch Hazel on your skin.

Just because it says natural, this doesn’t mean Witch Hazel is meant for everyone. Also, always perform a patch test under your arm before using anything new on your face.