One of the beautiful things about the English language is the wide range of ways there are to refer to the same thing.

This is further compounded by the many different dialects of English, like British English and American English. Today, I’ll explore one of those differences: the one between rubbing alcohol and surgical spirit.

While this may be the only difference between the two, I’m going to take a look at why the name of this substance changes when you hop across the pond. I’ll also discuss the differences between British and American rubbing alcohol, including the most popular types and concentrations in each country.

Is Surgical Spirit the Same Thing as Rubbing Alcohol?

This means that both substances are at least 60% alcohol, though the exact concentration that defines rubbing alcohol and surgical spirit depends on the authorities that oversee it.

In the UK, the official mix of surgical spirit is defined as 95% methylated spirit, which is an English term for denatured alcohol. It is so-named because it typically has methanol added to it, which is a toxic form of alcohol that is typically used to boost engines or as a cleaning solvent.

Despite this difference in nomenclature, American rubbing alcohol that is sold as denatured typically has a larger proportion of methanol in it than the British varieties of surgical spirit.

Keep in mind that the denaturing process isn’t entirely dependent on the use of methanol, both in the US and in the UK. Most rubbing alcohol manufacturers will typically use the most convenient denaturing agent that they can get their hands on at the time, provided it doesn’t affect the potency of their product.

Due to the industrial nature of rubbing alcohol and surgical spirit production, most producers will use whatever chemicals they have at their disposal to ensure that rubbing alcohol can’t be consumed.

In the official preparation of surgical spirit, you’ll also find 0.5% methyl salicylate, which is also known as wintergreen oil.

This additive gives the surgical spirit a minty smell that helps counter some of its strongly alcoholic scents.

While some kinds of rubbing alcohol feature this additive, this is much more common in surgical spirit, and if you live in North America, it’s possible that you’ve never smelled minty rubbing alcohol.

Keep in mind that these formulae for rubbing alcohol and surgical spirit are only guidelines, and they can vary considerably from company to company.

If a company wishes to deviate from the official formula of rubbing alcohol or surgical spirit, they are more than welcome to.

The only thing they have to do is ensure that the ingredients used are clearly outlined on the package and that the formula ranges in concentration from 70% to 99% (in the US). 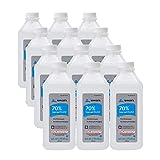 Where Does the Term “Rubbing Alcohol” Come From?

In America, the solution is known as rubbing alcohol because that was the name that it was originally sold under back in the 1920s, during the midpoint of the decade.

Before then, you couldn’t actually find rubbing alcohol on a pharmacy’s shelf, as there were many other preferred topical antiseptics.

There are a few reasons for the name, though the main factor was that rubbing alcohol was originally sold as a massage liniment.

Rubbing alcohol was seen as a good topical treatment for skin conditions (and it still is today!), and people believed that it helped improve the results of a massage.

The high methyl salicylate content in these original rubbing alcohols led to its inclusion in the present-day surgical spirit.

This and other additives and oils were included in early rubbing alcohol to make it more pleasant for use as a massage liniment, and you typically won’t find these ingredients in modern rubbing alcohol.

Another reason for the term “rubbing alcohol” was to distinguish it from drinking alcohol, especially during the Prohibition in America, when it started rising to prominence.

In spite of this difference in the substance’s name, it was a popular alternative for alcohol during Prohibition, as this was before denaturing was mandated.

Even though the substance only appeared during the mid-1920s, rubbing alcohol has been documented as a replacement for drinking alcohol since as early as 1925.

Where Does the Term “Surgical Spirit” Come From?

Surgical spirit has a much more obvious etymology than rubbing alcohol due to its well-known use in surgical theaters.

There are a few different uses for surgical spirit for doctors, though the most common one is to disinfect an area of skin before a procedure.

This can be as simple as an injection or it can be used to disinfect the skin before it is cut into with a scalpel, and this was especially prevalent in the past before the creation of more advanced local antiseptics.