In this guide, I will cover the details of rubbing alcohol and what exactly it’s made up of.

So what is rubbing alcohol? Rubbing alcohol is either isopropyl alcohol or ethanol that is not designed for human consumption. Rubbing alcohol contains between 60% and 99% alcohol and it is typically used for wound disinfection as well as surface cleaning.

I’m going to explore how rubbing alcohol is made and I’m also going to take a look at some of the key differences between it and alcohol that is made for drinking.

After that, I’ll discuss some of the differences between various types of alcohol and the applications that they’re suited for.

What Is Rubbing Alcohol?

Rubbing alcohol is produced first and foremost as a disinfectant, regardless of whether it’s used to disinfect wounds or surfaces.

The high level of alcohol contained in rubbing alcohol, ranging from between 60% and 99%, is what helps kill any bacteria or pathogens in a wound or on a surface.

This kind of alcohol is denatured, meaning that it’s had bitterants and other products added to it to ensure that it’s not drinkable.

If this weren’t added to rubbing alcohol, then desperate alcoholics may use it as a cheap way to satisfy their addiction, despite it not being made for human consumption.

The denaturing process is a way for companies to avoid being held liable for what happens to people when they consume rubbing alcohol.

The bitterants make this kind of alcohol nearly impossible to drink, and this also shows that manufacturers make an effort to prevent people from drinking their products, which can be crucial in court.

Another reason is that US legislation mandates that toxins be added to rubbing alcohol to protect alcohol tax revenue.

This ensures that rubbing alcohol doesn’t have to be taxed at the same level as drinking alcohol, meaning that it can be much cheaper and that people can’t use it to create their own alcoholic mixes.

The name rubbing alcohol comes from the early 1920s when the substance was first marketed. It was known as rubbing alcohol because it was meant to be used as a topical product for massages.

Since then, the name has stuck in the United States, but it has traditionally been known as surgical spirit in the UK.

During these early years, particularly during Prohibition, rubbing alcohol was used as a replacement for drinking alcohol, which was unavailable.

This contributed to the legislation that enforces the denaturing of rubbing alcohol, as legislators saw how easy it was for drinkers to turn to this product instead.

Here’s a summary of what you need to know about rubbing alcohol:

The flash point of rubbing alcohol is the temperature at which it will combust if it is exposed to a small flame.

This can be dangerous in some cases, such as when using it for medical purposes or when working with flammable substances. It’s important to know how to safely store and handle this product so that you don’t have any accidents.

What Can Rubbing Alcohol Be Used For?

Rubbing alcohol is a versatile solution that can be used for a wide range of applications, so it’s hard to find a direct alternative for it.

The most common thing that rubbing alcohol is used for is disinfecting both wounds and surfaces, though it also sees use as a topical treatment for certain skin conditions.

Rubbing alcohol, in all varieties and concentrations, is an effective killer of all germs and microbes. This is because alcohol dries out and kills living things, including the pathogens that are responsible for illnesses.

Being able to kill a wide range of microscopic threats makes rubbing alcohol at eliminating even hardy viruses, and that’s part of the reason why it’s been in such high demand during the COVID-19 pandemic.

Because of the high demand for disinfectants and hand sanitizers, many companies have shifted away from using rubbing alcohol in their solutions and switched to alternatives like chlorine.

Along with disinfecting surfaces and preventing the transmission of illnesses, rubbing alcohol is also used to treat wounds, ensuring that bacteria doesn’t enter them and limiting the spread of infection. 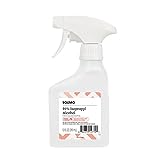 Rubbing alcohol may also be used for skin treatment, especially when you’re suffering from something that makes your skin itch, as it dehydrates the skin, reducing the itchy response. Rashes and poison ivy are two common sources of itchy skin that can be effectively treated with rubbing alcohol.

Since rubbing alcohol is also an astringent, it tightens your pores and it helps your skin feel renewed after it is used for massages. If you’re experiencing muscle aches, rubbing alcohol can be used as a liniment.

Rubbing alcohol can even be used as a replacement for deodorant if you suddenly find yourself running short on it.

Ideally, you should be using rubbing alcohol with a concentration of around 70%, though as long as you remain below 90%, it should still remain highly effective.

When you’re using something like isopropyl rubbing alcohol to clean electronics or disinfect surfaces, you’ll want to be sure that you pick the right percentage.

While conventional reasoning would dictate that higher percentages would be more effective at cleaning, this isn’t always true.

Keep in mind that the remaining percentage of rubbing alcohol is mostly water, and this plays a crucial role in the cleaning process.

Having more water in your rubbing alcohol means that there is a catalyst to start the reaction between the alcohol and the membranes of the cells of the contaminants that you want to destroy.

Since the water begins to permeate the borders of the cell, it blazes a trail for the alcohol to make it into the deeper layers of the membrane and do more damage.

On the other hand, when there is less water in the mix (i.e., a higher percentage of alcohol), the solution has to spend more time wearing away at the edges of the cells of contaminants.