Along with dish soap, bleach, hydrogen peroxide, bandaids, and other household items, rubbing alcohol is easily one of the top ten most-used solutions. It’s available at almost every store and usually doesn’t cost more than a few dollars for a bottle.

What many people don’t know, however, is that there are multiple types of rubbing alcohol that you can purchase!

Isopropyl rubbing alcohol has been the most commonly used kind throughout recent history. However, there are several other kinds of rubbing alcohol that has also gained popularity in recent times.

With the advent of the global Coronavirus pandemic, countries worldwide have seen a shortage of isopropyl alcohol. This, in turn, has caused many consumers to turn to other options.

In today’s article, I’m going to briefly go over the four main kinds of alcohol on the market, how they’re made, their primary uses, as well as some of their pros and cons. Let’s take a look!

Rubbing alcohol can kill mold, remove paint, clean glass, and other hard surfaces, sanitize your hands, and more! For the most part, all forms of rubbing alcohol on the market function similarly.

The main difference lies in how they’re made, and where the alcohol molecule is situated within the chemical chain.

“Alcohol” is a word that’s thrown around so often that its meaning is often forgotten. When you first hear the word, you may think of alcoholic beverages (beer, liquor, wine) or you may think of cleaning products.

If you’re into cars, you may also think of ethanol- a common fuel additive that’s mixed with petrol and gasoline.

With so many different uses for alcohol, it is easy to mix them up and consider them different from each other.

However, they all have the same chemical origin. Before we get into all of the different kinds of rubbing alcohol, let’s look at the exact definition to establish some ground rules:

Alcohol: “any of a class of organic compounds characterized by one or more hydroxyl (―OH) groups attached to a carbon atom of an alkyl group (hydrocarbon chain).”

As you may remember from chemistry class, the majority of substances used are made of hydrogen, oxygen, and carbon. These are the building blocks of life on Earth.

A little-known fact is that alcohol really isn’t all that different from water. They both contain hydrogen and oxygen.

The main difference is that alcohol has added carbon molecules and the structure is slightly different.

This is one of the reasons why alcohol is “water-soluble” and can be mixed with alcohol to create a homogenous substance.

I apologize for the chemistry lesson, but if you really want to understand the difference between different types of rubbing alcohol, it helps to know where it all comes from.

Isopropyl alcohol is, by far, the most common form of rubbing alcohol. If you go into your average pharmacy or grocery store and walk to the first aid aisle, you’ll see a variety of antiseptic bottles that come in varying sizes and concentrations depending on what you’re using them for.

Isopropyl alcohol is typically created from mixing water with a gas called propylene. Propylene is a compound that’s commonly used to create acrylic plastics and other industrial polymers.

When combined with water and distilled, the gas acts as a catalyst to turn water into alcohol (sound similar to an old Bible story?).

You can use isopropyl rubbing alcohol to clean keyboards and other electronics, for medical disinfecting, paint preparation, and even to kill mold! The reason it’s one of the most commonly found forms of rubbing alcohol is that it’s made from water, which is the most abundant resource on the planet.

Ethyl alcohol is usually referred to as Ethanol. You probably remember this term from seeing it on the pump when you’re putting gas in your car.

In the USA, oil companies are allowed to make their fuel mixtures with up to 10% ethanol. This not only cuts costs for them, but it also reduces carbon emissions and contributes to a better atmosphere!

If you want to learn how to make rubbing alcohol at home, ethanol is by far the easiest.

All you need to do is combine sugar, water, and a bit of yeast, allow them to ferment, and then boil the mixture.

Since alcohol boils at a very low temperature it will immediately rise to the top.

Since COVID-19 has caused an isopropyl alcohol shortage, many farms and even liquor companies have started to make their own forms of ethyl rubbing alcohol.

Recently, the FDA even updated its rules allowing ethanol to be used in hand sanitizer.

Methyl alcohol or methanol is not common for everyday use. You probably won’t find it in the grocery store and it’s considered very toxic for human consumption, skin contact, and breathing.

In fact, it was created from distilling wood in days past, earning it the nickname “wood alcohol.” Today, however, it’s made from natural gas.

Methanol is mainly used for industrial purposes. It’s a common ingredient in vehicle antifreeze, windshield wiper fluid, glue, and even in particleboard such as plywood.

It has also gained popularity as a diesel fuel additive to reduce emissions and smog in recent years.

Denatured alcohol is commonly found in hardware stores or camping outlets. It’s essentially just ethanol that has added chemicals that make it toxic and smell bad to deter people from drinking it for recreation. Sometimes the mixture also features added methanol.

Denatured alcohol is typically used as a fuel additive, and is also used in fire starters. In some cases, it’s also been used as an antiviral disinfectant.

Don’t put too much on your skin, for surfaces it can be a quick and easy isopropyl alcohol alternative for killing viruses. 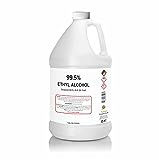